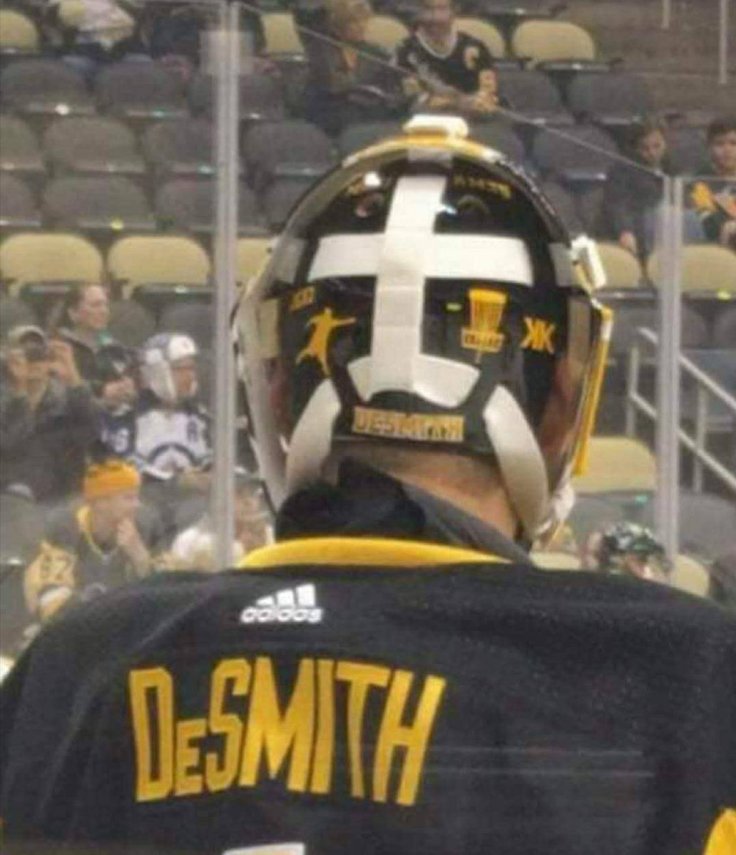 It is not very often that I get the opportunity to interview and talk with someone who is involved with Disc Golf, but, Disc Golf is not the main part of their career. I have talked to pros, PDGA members, local players, etc. But I recently got to talk to the Disc Golf goalie whose picture swept the internet where his helmet has a sticker of someone Disc Golfing on it. This goalie is none other than Pittsburg Penguins goalie, Casey DeSmith.

Everyone has a different start to their career in Disc Golf. When I asked Casey how he got his start he told me “I was home during the summer about two summers ago and my uncle from Connecticut was searching for this mini golf video and stumbled upon Disc Golf” he continued with “we went out and played our local course and fell in love with it, so I got my start by YouTube.” Which is a story I have never heard before. Most people I get the chance to talk to tell me that their story began at a young age and through friends. But, finding the sport through the internet shows how popular the sport has become and that anyone can join in if they choose to.

Being a professional hockey player means that you follow a regime like any other professional athlete. So, balancing the life between hockey and Disc Golf is tricky. He told me that “we have practice in the morning throughout the week and are usually done by 1 or 2 in the afternoon and if the day is nice ill go play 36 holes by myself or with some friends.” Which is a test to his character that he can balance both lives and make sure that he can find time to Disc Golf while in season. Another ball that he must juggle is he is a Dynamic Discs ambassador. He told me that he became an ambassador when “They reached out over Facebook and saw all the blogs and tweets about my mask and asked me if I wanted to be a part of the team.” I was baffled to hear how simple that process was and how quickly he became one once that picture surfaced. I asked him how it was to be a part of the team and he said “I am so grateful to have the things I have, I can take my family and teammates out and show them this sport. I also started to put the dynamic discs sticker on the back of my mask.” He is humble and by talking to him I could tell that he is so grateful and blessed to be where he is within the Disc Golf community and wants to help the sport grow like any other person.

Now, he is new to the sport and that didn’t stop me from asking him what his favorites are in the sport. No surprise when it came to his favorite disc he told me “I just got a lot of new discs from Dynamic Discs and my favorites so far are the Escape and the Convict.” I kind of figured that he had to rep his new team, but I had to be sure. If you are like me then you know that hockey teams travel across the country. So, when it comes to his favorite course I was surprised to hear that he does not have the time to play anywhere but home. He told me “From time to time I will sneak out but for the most part it is my home courses. In the summer I get to play course like Maple Hill which are about an hour away.” I did not know that he gets to play one of the best courses in the country in most people’s eyes. He finds the time to play these courses in the summer when he has a lot of free time.

To finish off the interview I always like to find out some advice from the individual I am talking to to help others within the sport. Being a professional hockey player, I wanted to see what his idea was within Disc Golf. His advice was “the biggest thing is to learn to throw the right kind of discs, starting with putters and mid-ranges then move up to high speed drivers once your form is down.” Which I think is sound advice. It is not the most precise, but the advice is accurate. I know when I started playing I didn’t know how to throw so I wish that some one had told me this when I had started playing.

I want to thank Casey for taking the time out of his day to let me talk to him. He is an awesome guy and was a pleasure to talk to. If you want to know more about him, you can find him on all forms of social media and through the Pittsburg Penguins team as well. Look out for more interviews coming soon!