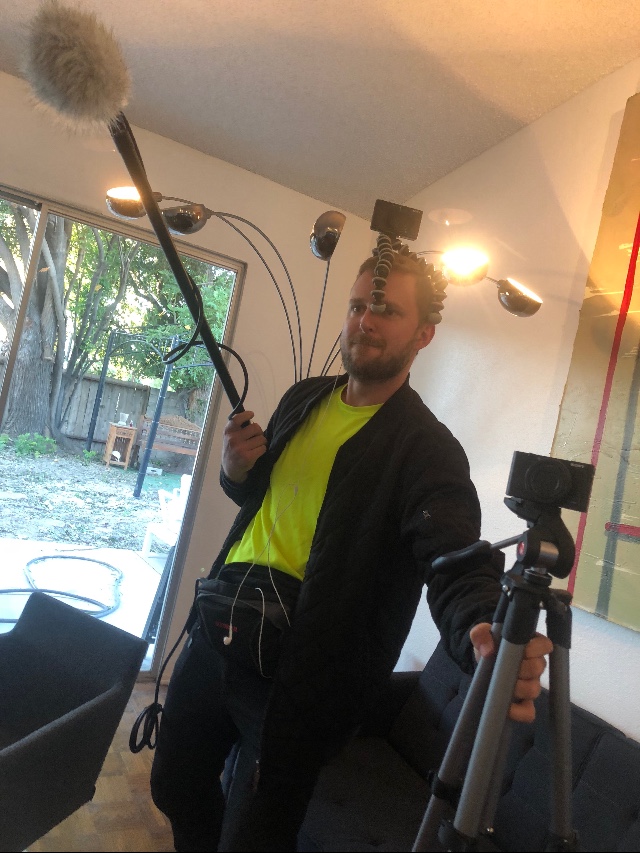 In the world of Disc Golf, new innovations come out each and every day to help grow the sport. One of the newest ones that I have seen make some waves Is the newest Disc Golf movie coming out by Lucas Dick. Hard plastic is something to be talked about and needs the word spread about as well, So, I talked to Lucas and learned more about him and about his new movie.

For Lucas, his start in Disc Golf is something that most people experience. When I asked him about his start within the sport he told me “When I was 16 my buddy and I were looking for a place to hang out. We found a park and saw people playing, we bought Discs that day.” Which is not something you hear about very often; few people go buy discs immediately after they see someone playing. But, I think that is an interesting story regardless.

So, I am sure some of you have seen the buzz around the movie and how fast its grown since it has hit the Disc Golf community. When I asked how he came up with it he told me “I have been doing comedy for 11 years and saw a project for Disc golf since the market is so open.” From that point on he began deciding what the movie should be about and how it needs to be. The preface of the movie as Lucas told me is “ a story about a young female disc golfer who wants to prove that disc golf is a real sport.” I love it, I think that idea is amazing. Having a story about someone who wants to legitimize the sport is something the sport needs to help grow and get bigger than it already is. When it comes to the actors in the movie, Lucas explained that “we used a local pro and some of the top amateurs in the area for some of the disc golf shots.” Getting actual Disc Golfers to be in the movie is awesome, it gives them exposure and actually has some reality to the shots and movements within the film.

Just like anyone else, I had to know what his favorite course and disc were. I know he is making a film about Disc Golf, but he still must have a favorite for both. When it comes to his favorite disc I was surprised by his response, he told me “The dart, I didn’t like it at first but now I can bang putts from like 50 feet.” I mean, it is an uncommon disc but still a good disc nonetheless. His favorite course is no surprise to me since he is from California his course is “La Mirada, or a lot of local stuff.” Which is a great course, so it is no surprise that he enjoys that course and makes it his favorite.

Now, when I began to hear about this movie and was talking to him about it one question I needed answering was simple, when is the movie coming out? Well the answer is not as simple as I had hoped for. Lucas told me that “I am a perfectionist with my work, it is just me who is working on the project” so he does not have a ton of help on the movie. So, he told me “the movie will come out when it comes out, I want it to be perfect. However long it takes is how long it takes.” The suspense will kill me, but, I understand that he wants the movie to be as perfect as it can be, and I can’t fault that. I also wanted to know how the movie would come out since there are so many ways nowadays to watch a movie. Not surprised Lucas told me “Ideally distribution in theaters, selling it out right away would be nice too. But, I will ideally go through the festival circuit.” So, just keep waiting for updates and being patient for the movie. It will be worth the wait.

If you have been keeping up and reading my articles, you can see I always ask for advice from the individuals I interview because I feel as though any advice is good. This advice is not for the sport but for film making in general and wanting to make your own film from scratch. What he told me was “Just do it. Start where you are, use what you have, do what you can. Its scary and its awesome, its life.” I do not want to go into film making, but, after hearing that I even wanted to go out and film and make these huge projects. The advice doesn’t just apply to film making though, you can take that into life and into Disc Golfing as well.

To round out my interviews I always like to give the person something to add about themselves that people may not know about them. Whether it’s a hobby, a talent, or they plug their social media. Whatever it may be, I always want them to get one last thing to say. With Lucas it was something personal but I liked it, Lucas told me “I am a sensitive guy, I am a comedian so I can turn on the confidence when I need to. But, I am a quiet guy who cares about others and wants to have people be able to emotional and okay with talking to me.”